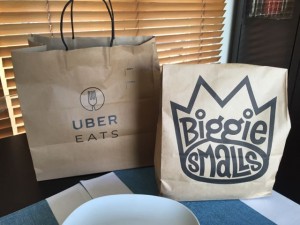 Christopher George Latore Wallace born May 21, 1972 and passed March 9, 1997, better known by his stage names The Notorious B.I.G., Biggie, or Biggie Smalls, was an American rapper. He is consistently ranked as one of the greatest and most influential rappers of all time. Hits you might know include Juicy, Wha Shot ya, Ten Crack Commandments and Nasty Girl, as well as the Notorious B. I. G. Once you cover that off the menu starts to sound a bit more familiar!

Shane Delia, owner of Maha and Biggie Smalls, TV personality and Middle Eastern food aficionado had a genius idea – lets grab a spot on Smith Street and sell a damn good kebab and have some fun too. The fit out is diner-esque, the staff are having a great time, Shane can often be spotted wrapping a falafel or two and the menu has enough to keep you coming back to try again and again. 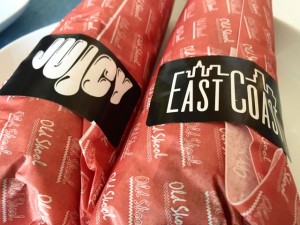 So ‘KBabs’ – not helping the kids with their spelling here but providing very yummy food and a lesson in 80’s rappers! You can enjoy any of the following all wrapped in one of those super pillowy soft flat breads that rock my world!

Too much good stuff to choose from? 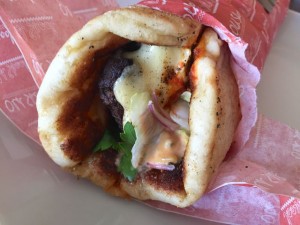 The ‘Juicy’ with Beef, lettuce, cheese, onion, mustard mayo and parsley was IMMENSE! Hubby made all the right noises and was completely in love with his handful of Juicy!! 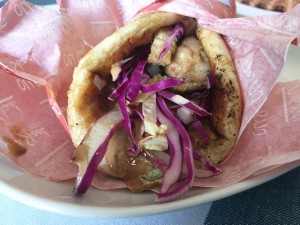 My ‘East Coast’ with Pork, raw slaw, crackling, coriander and spiced peanut mayo might have been an odd choice, I would normally go the lamb or the fried chicken first but my instincts were right! It was fabulous and the spicy peanut sauce – legend! 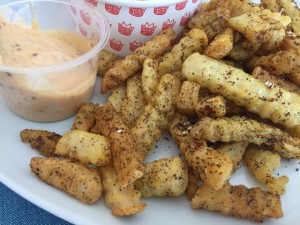 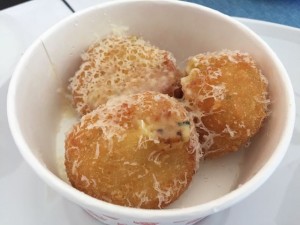 Missed out on the Corn Dogg with Turkish beef sausage corn ‘dogg’ and smoked mustard mayo but the sacrifice was worth it for the ‘Return of the mac’ Mac and Cheese fritters people – SENSATIONAL cheesy gooey loveliness.

Like I said, you’ll have to come back to try out more of the menu as there is just too much good stuff on here!