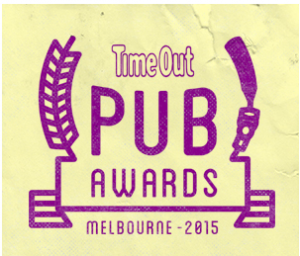 It’s time to celebrate the great pubs of Melbourne with the team from Time Out, May 18th brings the 2nd annual Pub Awards being held at Beer DeLuxe at Fed Square and they are going old school and bringing back pub classics with a good old fashioned raffle, a great band (The Beans) to tear the house down and even a lucky badge draw. A great night to learn which pubs are doing it all right and recognise some old favourites that deserve a second look. Check out the full rundown of this year’s nominees, including the top 10 finalists for the People’s Choice award, as chosen by you, some of the greats are;

Voting for the People’s Choice award has now closed. Stay tuned for the winner!

FREE TICKETS – Foodie About Town has two free tickets to giveaway, if you would like to come along for a night of bar accolades, delicious pub grub, beer from Little Creatures, cocktails from Canadian Club, wine and more, just comment below on your favourite Bar and why and the lucky winners will be announced Sunday May 17th.