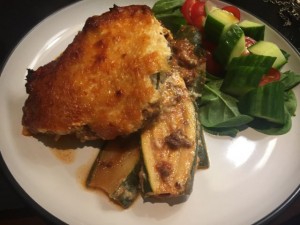 Ingredients for the bolognese;

Brown the onions for five mins in a pinch of salt and pepper, no oil, pop a bit of water in if they stick. Add the celery and herbs for two minutes and then the mince. Break up the mince and stir until most of the mince has browned.

Add the rest of the ingredients and leave on a low simmer for 3 hours. Make sure you stir frequently and if the sauce starts to dry add more boiling water.

Too assemble slice the zucchini longways and try and get 3 or 4 slices out of each drowning how big but slices should be around 5mm.

Mix the ricotta and milk together.